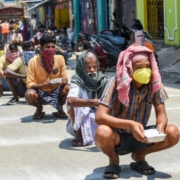 They say the enemy came from Wuhan, after a deadly rampage

there, crossing the closed borders, riding unsuspecting humans as

carriers. And, a pandemic got unleashed, first local, then

global – like the other items of import and export of the

globalised markets, but this one, dreaded. Then, reactions

set in – hyper-nationalism, xenophobia resurfaced (always lurking beneath the calm surface, every culture) and borders got closed again and again…but it evaded  the capture! Phew! Too much!

The enemy is here, in second wave, in the shimmering air! It has

1.3 billion-plus citizens of a developing economy – mere vote banks, every five years. Their sad stories of sheer misery, loss and bereavement – only a TV spectacle and social-media forwards!

…and the capital and power play the chess game, populations-pawns, as their hostages…

We are the fodder, the 99 percenters, for the one percenters of the world – chants the massive crowds in the old public squares, the world over – rage rising up, as volcano eruption, and the distant thunder – on the red horizons – and the spectral Louis XVI and Marie, hovering on the margins.

The blind seer sees the truth – ignore at your peril, the insulated elites!

Pandemics come with a strange syntax, idiom and grammar of their own, these plagues – subalterns – seek justice and equity, haunt the ongoing

the invincible kings and emperors, from secure pedestals, in a single sweep!