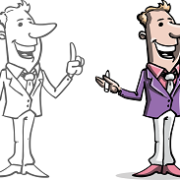 “‘Sar” was on the phone. He placed his hairy hand on the speaker and said in an irritated tone, “Now, what is the meaning of all this?”
“So-r-r-ee, S-a-r, he has done it.”

“He…he…,” she stammered, out of excitement, pointing to the hall outside, eyes popping out.

“Take your breath…Good…now, tell me what the excitement is about?”

“There, in the mainoffice, outside, creating havoc. Out of control.”

Sir put down the receiver, adjusted the silk tie and the golden frame of the spectacles and walked with great authority to the main office, followed by an excited Ms D’souza.

The outer office was in chaos. The doors to the office were locked from inside and the heavyset Gurkha was standing there, guarding it ferociously. In the middle of the office, amid gaping colleagues, computers and files stood Gopal with a revolver pointed at his temple.

A hush fell. The boss had come.

No answer from a distraught Gopal, while colleagues waited, taking pictures.

“I am talking to you, Mr. Gopal,” the boss switched easily into his silky voice, usually reserved for tough customers and beautiful women. The room sprang into life. The assistant manager stepped forward reverentially.

“Oh, nothing to worry about sir. Sorry to have disturbed you… Sukhi bring a chair for Sir… here, take it, Sir.”

“Thanks, Parikh. Now, what is this racket about?”

“I will tell you, Sir,” said Vilas Joshi, coming forward, respect writ large on his lean leathery face, “we were taking lunch and chatting. He was sitting quietly at his desk. Suddenly, he jumps from his seat and takes out his revolver and says call the top guy, otherwise I shoot myself.”

“Only he can tell you, Sir.” The hush fell again.

“Come on, Gopal bhai, ” saidRama Kamath in an equally gentle voice, “See, Sir has come, despite his very hectic schedule.”

“Yes, please, do not waste his precious time,” chirped in Subramanayam.

All eyes were focussed on the short, stout, ugly-looking Gopal.

“Gopal,” pleaded Ms Banerjee, “Sir is waiting, do not
hesitate. Tell him what agitates you so much.”

An eternity followed. Assistant manager perspired, despite the air-conditioner. The boss adjusted his tie, fumbled for his cigarette pack and took out one. Many hands darted forward with their lighters. The boss lit a cigarette from the lighter of the assistant manager and emitted a lungful of smoke. The asthmatic Ms. Banerjee dared not cough.

Gopal surveyed the scene with his red-shot eyes, cleared his throat, put the revolver in his left trouser packet and said, “OK. I want to talk to the boss and you all.”

“Go ahead.      I am listening.” The boss sounded gentle and all ears.

“You know my son is suffering from malarial fever?”

“Is that the matter? I mean,” the boss recovered quickly and added in a soothing voice, concern oozing, “nobody took notice? Strange! Awful! This must not happen in my office… really, terrible! Now, tell me, who did not notice your human agony… really, shameful!”

A space dominated by the top guy who asked sternly, “Tell me, my dear friend, who did not listen to you?”

“I was feeling so miserable,” Gopal recalled in a tearful voice, “In the dumps. My only surviving child down with body-breaking fever for more than seven days… To-day, he is all alone in the flat… My wife and I have to report to work… We requested the maid to come and check him in between her busy routine…”

“What about   your neighbours?”

“Well, they are as indifferent as you folks… they think disease visits us only and not them…”

“Atrocious,” the boss boomed, puffing on his cigarette, “Death and disease, misery and accidents, are all the province of humankind.”

“For the first two days, my wife was on casual leave… then I took two-day casual leave… To-day, I came around 10 A.M. in the office. The torturedface of Sagar haunting me throughout the one-hour-and-a-half Journey from Dombivli to the CST here.” Gopal swallowed hard, his tired middle-class anonymous face cracking like a mirror, “I walked down to Colaba to ease the pain, to forget the face of a fever-ravaged sick boy… Even the beauty of Colaba failed to distract…The Arabs, the White tourists, the smilingcall-girls going in expensive cars, the Leopold Cafe, the food, the wealth — everything, just everything out there knew happiness, pleasure… I got more upset by this fun-loving world…indifferent to the suffering of a poor father!”

“I can understand,” the boss observed, “The whole world out there is wicked. Full of cannibals. They, the Czars of pleasure, have no concept of pain, suffering, fellowship. We are living on a strange planet.”

“Superb, S-a-r,” Ms D’souza heard her voice gushing like water. The boss, happily smiled at her, this time. More glances of “You, too, Ms D’souza!” were exchanged around the office.

“Well, they can be pardoned,” Gopal saidsadly, “They are strangers. What about my colleagues? I have spent ten years with them of my adult life. Ten years! Eight waking — hours of my life, six days every week.”

The air — stale and smoky — became thick with tension and a futile search for a hole in the carpeted floor of the swanky, hi-tech, expensive office on the fifth floor at Colaha, with asweeping view of the far-off sea and sprawl of the high-rises.

“No, this social behavior cannot be pardoned,” declared the boss.

“I went to Mr. Parikh”, Gopal continued the monologue, “He said he was sorry and then resumed his work.”

Parikh felt the sharp edge of the sword of the executioner, “No. No… I heard him out patiently and offered help but I was preparing the report for tomorrow’s meeting at the Taj.”

“Very unethical,” the boss admonished, “We, at Shah and Mehta, believe in management with a human face.”

“Then I went to unburden my soul to Mr. Kamath.”

“Kya  bolte ho, Gopal bhai”, whined Kamath, ” We have been buddies for last seven- eight years. I even visited you at Dombivli from Virar, on a Sunday, to condole the death of your mother.”

Gopal smiled like a crazed man, “Yeah. You came there to finalise wedding details for your sister and en route, dropped in. That too, two months after my mother’s death!”

“And what about you, Subramanayam?”

Subramanayam was already counting his number in the line of fire. “Well, I spent ten minutes with you. Then I had to prepare the salary statement. And, after all, it ismalaria — so common a disease here.”

“Even D’scuza and Banerjee spoke in monosyllables. Then I went to you, Sir.”

The bombshell. The ticking of the clock could be heard in the ensuing silence. The boss missed a beat.

“You were busy on the phone. Ten minutes I waited. Then you heard me out and said, ‘Take care, O.K.’ And dismissed me.”

The thick silence could be slashed with a knife.

“Then I decided to take my life.. As no point in living with friends who can no longer sympathise and make feel human. Not like an outcast. And I promise to keep my word — NOW.”

The boss leapt out, embraced the short, ugly man — a mere clerk and spoke in a tearful voice, “I am sorry. Do not leave us like this. We love you. “

That did it: the top guy, with silk tie, golden frames and apersonal Opel Astra, embracing the lowly, love-starved clerk. Gopal dissolved into pitiable tears and cried like a baby. Ms D’souza and Ms. Banerjee too cried. And the boss also cried. Normalcy was finally restored. After two Cokes, two sandwiches, Gopal was sent home — in the Opel. (The Opel left him at the terminus.)

Post-lunch, colleagues discussed the crisis and its apt handling by the top management.

“This Coke – and – sandwich – and – car stuff was marvelous,” said Parikh.

“The man is nuts for sure. Seeking attention all the time. A cry baby! Cannot handle a small fever! Threatening suicide! See!”said Kamath.

“Your crisis management skills are matchless,” Subramanayam flattered Sir. “You prevented suicide by an unstable man. A disgruntled worker! Phew!”

“That is why he is the top guy at such young age, managing such a big company so well,” Ms. Banerjee said, grinning.

Boss blushed. Men nodded in agreement. The bonhomie was infectious. The boss not only sat with the juniors but shared lunch and cracked jokes—everybody smiled. Then, later on, the boss in an expansive mood, ordered a round of pastries and pizza by way of the afternoon tea party to the staff. The assistant manager summed-up the office mood, “Thanks, sir, for solving aunique crisis. It would have brought bad press and disgraced the office. Our reputations were saved by the quick thinking and timely action by you. You are great, sir!”

And the boss beamed in public adulation and boomed, “Oh, come on, guys!  It was just a small lunch-time crisis.”