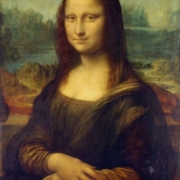 Everybody called her Monalisa.

Nobody knew or cared who the real Monalisa was. The name just stuck on. Just like that. Three months and she was already running the household like an old woman.

If grandma needed warm water, she would shout, “Oye, bring me some warm water. My feet are giving me hell.” Grandma — the poor soul! She suffers from joint pain and pain of every conceivable type — rarely stirred out of her large bed and needed lot of things in her ground floor room. The burly mustachioed Grandpa needed tea after every half-an-hour in the cluttered drawing room. He would sit throughout the day, watching television, smoking constantly and coughing and belching smoke —making the whole place look like a huge chimney — and, reading morning paper in installments, throughout the long and still days. Monalisa supplied him with tea every half an hour and grandpa would feel mightily happy with this service and say invariably, “Here comes my little precious Monalisa. The only soul who cares for an old man in this goddamn cursed house,” and while saying so, he would often peer over the glasses, his gray bushy eyebrows uplifted, reminding you of a tired Santa.

Bhavi wanted the breakfast early in her first-floor bedroom and would shout urgently, “Monalisa, run. I am getting late for office again.” Little Monty always forgot his tiffin. Monalisa would run after the auto and hand it over to fat bespectacled sleepy Monty. She was on her toes right from morning till evening. Within last three months, she had taken over all the responsibilities of an adult homemaker. Grandpa would often say, “If Monalisa runs away, we would all be in great trouble, starved and mad at the other.”

Bhavi would feel irritated by this grim forecast, “Why would she run away? The rich food she eats here, frocks of my Tanya she gets to wear, will she be getting all these things anywhere else?”

Grandma would say, “Oye, Pa is getting soft in his head. Old age? He goes on babbling like that. Always seeing bad things first.”

Bhaiya* would shrug off, rephrasing his boss, “The world is full of such Monalisas. If one goes, another comes. Nobody is indispensable in the world. Is it not Pappaji*?” Pappaji would grunt.

Tanya, doing her homework, would add, “Before her, there was Rani. Before Rani, there was Kusum. Before that….”

Little Monty would interrupt the total recall, “Look, Pappaji, Tanya is not doing her homework. She is disturbing me.” Tanya, hurt, would make faces, “Oh, the Einstein is working. How many marks did you get in math in the first term?” Little Monty, looking cross, would adjust his Harry-Potter frame over his hooked nose and say, “What about your physics, Didi*?” Tanya would sigh, “Oh, you would know when you come to class VIII”.

Deep down, everybody dreaded the prophecy of grandpa. The fact was that our house ran because of these servants.

When Rani had disappeared one evening, there was total chaos. It had continued for long. Nobody got anything on time and everybody cursed everybody else. Old grandma cursed her fate. Grandpa cursed rising prices and the government. Bhaiya and Bhavi fought bitterly everyday.

“Where is my breakfast?” he would ask.

“I am already late. You prepare one for yourself and one for the kids,” Bhavi would answer flatly.

“Oh, so I should leave my job with an international company and become a cook at home.”

“Leave that job then. I earn quite sufficient.”

“No. You leave your job first.  Why should I leave my bank job?”

This was routine. The mornings were awful ritual and a delight for the nosy neighbours.

Both would leave, cursing each other. Grandma, deprived of tea, would grumble, “Oye, my legs. I wish I were dead.”

“That you have been saying for last 45 years,” grandpa would say. “Oye, You always wanted me dead. Listen, old man, I am not going to die. If I do, I will come back as a bhoot* and torment you forever.”

“For   that you need not die. You have already been doing all that to me,” grandpa would say and laugh his belly laugh. “Oye, my kismet*. Nobody wants me. That bahu*, that son, my own man—nobody wants me anymore. What should I do, rabba*?”

“Keep your mouth shut. As easy as that.”

“Oye, nobody allows me to speak now. O good Lord! strike me dead,” she would cry.

Little Monty, dressing by himself, would say, “Why does grandma say Oye, Oye?”

“Oye, Oye, nobody allows me to speak, not even my fat sis,” he would complain. Tanya would fly for him across the room but our Einstein, a smart runner, would fly faster than a missile.

“This house is a nuthouse!” Grandma would say.

“No doubt about it. ” Grandpa would   confirm.

In this chaos, one August afternoon, walked in a little girl, later called Monalisa. It was unusually cold and wet day, dull and grey, the heavy rains whipping the high-rises of Vasant Kunj in New Delhi. Dark clouds had covered the area and mild darkness had fallen. The doors flew open magically and entered a child, followed by a short, slim man. The gloom of the day was lit up by the silver of the lightening that traveled like an enormous quivering white snake across the sky.

“Papaji, this is my daughter.”

“Do not go by looks. She is small. She can clean, sweep, cook. She is very good at that,” the dhobi* said, hard selling her as if she were a new detergent.

“What should we pay?”

“You keep her full time. Feed her. Then pay whatever you want.”

The deal was on. The dhobi did not say goodbye. He turned his back and went out in the pouring rain. The child looked longingly at the rain, the retreating figure, and the outside world. She half- raised her hand to wave at a receding father and then stopped in mid-air, lost in that instant between a fading and an emerging world.

“Child, make me a cup of tea,” Grandpa said gently.

That moment on, she was sucked into a new adult harsh reality.

Her pearly smile won everybody’s heart. Her waif-like figure flitted silently from room to room and she cleaned, swept, mopped like a new detergent. The only difference in her appearance was an occasional shampooed hair and scrubbed-clean look. And she looked out of shape in the hand-me-down, ill flitting dresses of Tanya who had overgrown or discarded them for her hundredth dress. The madness had subsided but temporarily and everybody got food of their choice in time.

“This girl can work like ten horses,” Grandpa said one day.

“Oye, do not cast an evil eye. May God give her more strength,” countered grandma. In the duplex, Monalisa occupied a 3 ft 2″space on the threaded carpet of grandma’s room. That was her nocturnal home where she slept like a log. Her family never visited.

After Diwali, all of us planned to visit Agra. My job was to deliver her to the dirty basti*, 10 km away, where her family lived in a shack under a spreading old banyan, near a Hanuman temple, an open-air structure next to the tree where elders congregated for their daily fix of gossips, chai and smoke. As I left her there on the side street, I saw her running off the remaining 100 meters, the distance that intervened between a free world and a grown-up world. I sat in the car and saw her disappear in the crude shack made up of plastic and ropes and bamboos. The 10-meter yard was reclaimed from the weeds and dressed up. A tulsi pot bloomed. She came out immediately, waved her hand to signal safe arrival, and smiling, vanished again in the dark womb again.

Evening I came back to retrieve her. I was a bit early. Cold November dusk was settling down. The orange disc was slipping fast behind a bank of the fluffy, white clouds. Crows were returning. An icy wind had stated blowing. I got down from the car and walked the short distance to the home of Monalisa. She was not there. Her asthmatic battered graying starved mother went out to search for her.

Then I saw her.

Some 600 meters away. She was playing with kids her age. She was running, her hair streaming, thin face flushed, yelling at the top of her piping voice, a little goddess in motion. Some kid was chasing her. In order to avoid the pursuer, Monalisa, happy and excited, began climbing the nearby peepul tree. All the malnourished brown kids, sweaty and out-of-breath, shouted and formed a circle beneath the tree.

A simple game I have never seen Tanya and Monty play.

The simple drama was rudely interrupted by the yelling of her mother. In a minute, she ran up to me, followed by her lean, semi- starved, ill-clad kid brother crying for her, “Do not go, do not go. Let us play one more time, didi, please. Come back.” The light went out of didi‘s eyes. Her mother grabbed the whimpering child but it cried louder. “You have to wait for her for so long. Please excuse her, she is just a child,” her frail mother, lifeless and bloodless, pleaded with me abjectly. “No problem. I can understand.” I said, already feeling like a robber. We went to the car. She looked back longingly, her eyes blank, face drained. Her friends came running, waved and then began playing. The brother cried. A cold wind sliced us cruelly in the middle. The sun, effeminate and yellow-faced, went down. The early darkness suddenly embraced us.

As soon as she entered, grandma shouted, “Oye, fetch me warm water. My feet are hurting.”

“And tea for me,” said grandpa. She went straight to her territory.

I said to grandma I was not in a mood to bring the child back, at least, for a night, “She would have enjoyed some time more with her family.”

“Oye,” Grandma glowered, “You have become like a woman. Men should be tough. These are poor people. They breed like pigs. If we had not taken her in our custody, her drunkard father would have sold her to a brothel. We provide safety, security and food to her. She gets decent treatment here. She is family to us.”

I did not argue. I went out and blended in the gloom of the advancing night. The cries of a phantom brother and sad eyes of Monalisa haunted me for long in that short winter night.

*papaji: An affectionate way of addressing a grandfather in Northern India